Kung Fu Lawyer: Opponent in the Courtroom and the Martial Arts Ring 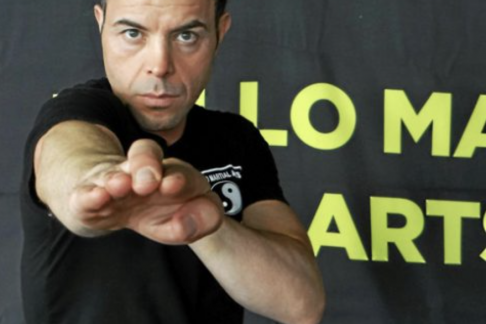 Opponents might think twice before crossing attorney J. Dallo. Not only does he fight for his clients in the courtroom – he’s a fierce competitor in the martial arts ring, earning the moniker “Fastest Kick in the U.S.” in 2000 as Michigan Kickboxing Champion.

Dallo got his start at the tender age of 9, with informal training from a neighbor who was a kung fu instructor. At 14, he read “Tao of Jeet Kune Do” by famed martial arts master Bruce Lee cover-to-cover and began formulating and practicing his own workouts and training methods.

“I watched kung fu movies and immediately told myself I could do what they did in those films. Even watching Bruce Lee, I was convinced I was athletic enough and fast enough to move like him,” he says.

At 16, Dallo was ready to begin formal training at martial arts schools. And in 1995, while a senior in high school, he entered – and won – The Challenge of Blood, Sweat, and Tears, Michigan’s first no-holds-barred competition.

A winner of the Detroit Athletic Club “Fall Boxing Classic” in 1999, Dallo captained the University of Michigan Wolverines boxing team where he was named “Most Outstanding Boxer” in 2000 and “All-American” in boxing by the National Collegiate Boxing Association; and was a USA Boxing Golden Gloves Finalist in 2001.

Dallo is a trained and competition-tested disciple of Muay Thai, a combat sport from Thailand also known as “the art of eight limbs” combining fists, elbows, knees, and shins in stand-up striking and clinching techniques.

Sijo (founder of an art) Bruce Lee is Dallo’s main role model. “He was disciplined and focused. He was giving and kind,” Dallo notes. “He was not perfect in life, but he did the best with what he had.”

Dallo – who earned his undergrad degree in political science from U-M, his J.D. from Cooley Law, and who clerked at the Oakland County Circuit Court – is founder and president of Dallo Law, a boutique law firm in downtown Birmingham primarily dedicated to criminal defense, DUI, and immigration. Recently selected to Super Lawyers as a “Rising Star,” he attributes much of his success to the discipline of martial arts.

“The arts have taught me to stay focused on a task, to pay no mind to naysayers, to absorb what is useful, discard what is not, and add what is uniquely my own style to whatever I’m doing and be proud of it,” he says.

Last fall the Oak Park resident followed a long-time dream and opened Dallo Martial Arts in Southfield, an opportunity that presented itself after the Detroit studio where he taught and trained for a couple of decades closed.

Many of Dallo’s former students now attend his new studio, run by operations and instructor manager, Nick Cavallino, a 15-year veteran of martial arts. Students range from toddlers to seniors, and include participants with disabilities.

Addressed as “Sifu” – a respectful term for a teacher – by his students, Dallo explains that participants learn discipline, fitness, stress reduction, and self-confidence, as well as the art of self-defense, and how to express themselves.

“It helps them engage in a positive, healthy activity,” he says. “They are losing weight, learning new skills, learning leadership, become more social, more active, and being more aware of what they consume.”

Dallo enjoys martial arts movies, whether comical or dramatic. “I love them! Bruce Lee was a beautiful specimen and wonderful display of hard work and dedication to his craft. ‘Kung Fu Panda’ is a fun way to show kids the beauty of the arts. ‘Crouching Tiger’ was a beautiful and well-written film that blended love and drama within the arts. They attach to a person’s emotions and pique curiosity because the displays are something we wish to imitate.”

Martial arts provide a relaxing outlet from legal cases and the courtroom. “Before, as mainly a student, it was amazing how the arts could take my mind away and help me recharge by simply putting on the gloves and training and sweating,” he says. “Now, as a teacher – and student on my own time – I’m focused on my students as I teach the arts I love!”

Why have martial arts held such an appeal for Dallo since childhood? “Why does an artist enjoy painting, why does a teacher love to teach, why does a boxer box? It satisfies so many things at once for me,” he explains. “My competitive juices are quenched, I’m able to express myself through the arts, I’m able to give something to others that becomes a part of them as it has become a part of me.”