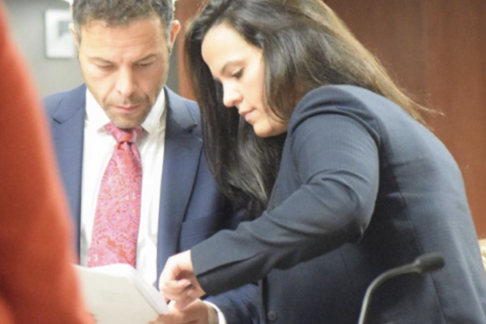 This article was originally posted on Macomb Daily by Jameson Cook.

A former Warren woman whose negligence caused her baby to drown avoided jail Wednesday and instead was sentenced to five years probation.

Sara Al-Mestony, 28, received the sentence from Judge Kathryn Viviano of Macomb County Circuit Court for the death of her 8-month-old son, Mosatafa Galdi Jr., who was found unresponsive in August 2017 in a bathtub of her home in Warren Manor Apartments near Eight Mile and Dequindre roads. Mosatafa died later the same day.

Evidence showed Al-Mestony was on the phone with a car dealership while the child was drowning.

In sentencing Al-Mestony, Viviano departed downward from the sentencing guideline range starting at between 29 and 57 months behind bars. Viviano noted Al-Mestony’s actions at the time were not necessarily criminal and actions in the weeks and months following the incident show remorse and accepting blame.

“This court sees this as a complete tragedy,” Viviano said from the bench. “We are talking about negligence to the point that it resulted in the loss of a child. … She will live for the rest of her life knowing that she was responsible for what happened to her son. I think that basically is a life sentence.”

Assistant Macomb Prosecutor Suzanna Shkreli, noting she was the only advocate for the victim, asked for a sentence within the guidelines.

“Somebody needs to speak for him,” Shkreli said. “He’s never going to grow up, he’s not going to get married or go to school or graduate.”

She said Al-Mestony initially tried to deflect blame by saying the child choked on crackers or cookies or could’ve drowned by having water poured over his head.

“She was scared she was going to get in trouble and didn’t want to be forthright with what happened,” Shkreli said.

Viviano conceded, “It was not a good moment for her in not taking responsibility,” but that Al-Mestony has shown a great deal of remorse.

“She’s showing remorse by not only her body language here by all the activity she’s done afterward … complying and doing everything she has.”

Al-Mestony has no prior criminal history.

Her attorney, Jalal J. Dallo, said outside court, “She screwed up and she knows it.”

Minutes before in court, he told the judge, “I don’t see how incarceration serves justice here. She’s a tragic figure in this whole matter.”

Al-Mestony and her husband have since given birth to another son who is 18 weeks old.

“What am I going to say that will bring back my son,” a weeping Al-Mestony said in court, referring to her newborn.

“I am doing what I am supposed to be doing to keep him safe with me,” she said. “God gave me a second chance.”

She has taken parenting classes and attended therapy sessions since the incident. After her second child was born, state Child Protective Services filed for termination of her parental rights but since has altered it to a reunification plan due to her efforts, attorneys said. Al-Mestony will have to comply with several conditions as part of that case. She currently can only be with her new son in the presence of her husband or mother.

Viviano also ordered removal of a tether that she has been wearing.

As part of  her sentence, she cannot supervise any other children unless their parent or guardian is present.

Dallo said he, his client and her family were pleased with the sentencing.

“The most important thing is a mom gets to stay with her new baby and live a healthy life with support from her family,” he said.

This article was originally posted on Macomb Daily by Jameson Cook.